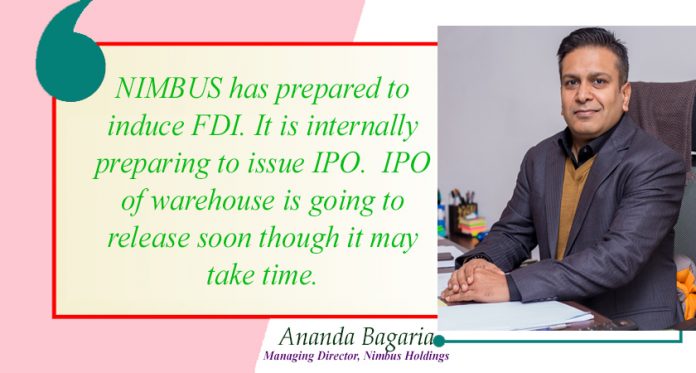 Engineer by Degree. Highly ambitious youth with a dream to become boss. He was not naturally inclined to seek for a job. And didn’t want to work. Went for business with a motive to manage small expenses with ease and keeping ownership of time within self, quoted managing of NIMBUS HOLDING Pvt ltd Anand Bagaria.

He did not have any other choice in Nepal at the time when NIMBUS HOLDING was started. He only had dream and zeal to do business. He established ball pen factory with brand name swift in Hetuda industrial area partnership with nephews of father.  He ran the factory for 4/5 years. But have lost in the business. However, he did not stop.

He started trading confectionary and biscuits importing from India. His nerve shot after sequential failure. Its hurtful to bear successive failure, and have least big leasion was in dilemma, he quota.

At that time, he was suggested to business of supplements in animal field by a friend of father and so Bagaria began business in animal feed.

It is an anecdote of 1998/99. His father and his friends knew about the enzymes of poultry. Friends of father told that we will sell, if you import and I started it confidently said Bagaria. But he did not get support as had expected.

At that time, he thought that he had been trapped. Had almost invested 20 lakhs. Had loan of bank.  Had to earn to pay loan. Poultry farms was doing the business nearly about 12/13 crores. He was now encouraged.

At that time, he thought that he was trapped. Had almost invested 20 lakhs. Had loan of bank.  Had to earn to pay loan. Poultry farms was doing the business nearly about 12/13 crores. He was now encouraged.

In the proceedings, he observed that it was technology intensive and lot of people did not know about it. He now realized that it needs a massive investment. Rather than increasing the investment, he aimed to use modern technology.

He has got a lot of support and motivation from father who himself is a businessman and also from his friends. So, it was bit easy for him to understand business. He also has got opportunity to learn business from businessmen like Gunchandra Bista, Chandra man Shrestha, Devendra Shrestha, Upendra Rijal. They were all feed traders.

They not only did purchase the feed of production of NIMBUS but also taught method and process of business. Susquently, he continued the the business of feed supplement. He has been supplying 600 and half tons each day that had began with 100 tons. There are three plants. There is a demand of more than 2500 tons a day in Nepalese market.

Bagaria began the business in 2000. There was an agreement of trade between India and Nepal at the time. Then he started to export supplements India.  After that he tie-up with one of the biggest company of India  called Suguna. Bagaria started to work with Suguna. ‘It is motivating to learn new work ‘ he added that they started to produce feed investing in Joint Venture in Birgunj with the support of technical expert.

Suguna was big feed mill of Tamilnandu. He also had an opportunity to observe feed mill since he was partnering with them. They were using new technology. The same technology is planted in Nepal as well. Suguna and NIMBUS broke away their partnership. It was difficult period for him.

NIMBUS has now been established and doesn’t need introduction. NIMBUS has now become the pivot of agriculture sector of Nepal. He is doing better than anticipated. His honesty and hardwork can be attributed as main factors to his success. Now NIMBUS has been dealing not only with animal feed but also with food production.

NIMBUS marketing was famous in India while I was in college but did have think in advance he added. Sanjay Agrawal who was also a partner had suggested him to name the company from ‘N’.  Bagaria named it from the alphabet ‘N’ on the suggestion of Agrawal. But they parted away in 1998/99. He is now my close friend’ he remember.

It was very difficult to manage investment in feed sector. Though Bagaria father was a businessman he was yet to be successful. He did have money at the time of beginning of the business. But had both the good amount of fortune and good will. On these basis, Bank extended him credit.

Right from beginning, he had announced that he would pay only if business generates revenue otherwise would be difficult. They have had land in Birgunj and where they established the industry. Things went well on the basis of track record of father.

Idea and capital both are equally important for the startup business as he experienced. Company has also took the pace of growth. They all have very good support and assistance in taking NIMBUS at this stage. Bagaria also took the loan to start it. He has now in good position in his business than what he was anticipating. He had not never ever thought of doing a business.

He has continued sly focused on assisting and promoting farmers. NIMBUS also started dal and oil mill to support value add in the production of the farmers. Food business is its latest segment. It has been running for three years.

All the company of the NIMBUS group has become getting bigger. He has strategy to establish farmers along with the success of the company. He had and has aim to do supplement with farmers. He has been focusing on assisting and promoting farmers. He is running dal and oil mill with the purpose of value add to the production of the farmers. Food business is the NIMBUS latest segment. It’s been running for last three years.

NIMBUS has started to do food process not only the feed. NIMBUS has concentrated to focus on nutrient food in addition to the processing. The company has vision and planning to work tendering on chemical manure besides the building warehouse to store.  NIMBUS has shown its interest on storing the production of farmers.

NIMBUS has been working on four verticals. Feed Side, Food Side, Chemical Side, and Plastic Side. NIMBUS started to work on paints and agriculture in chemical side and production of sack of cement in plastic side. Besides, it is supplying oil required by industry.

He is aiming to do food retailing in addition to the other business. It is his favorite business. NIMBUS will fully have engaged in this. Bagaria also has preparing to use new technology. Processing of protein is his new strategic plan.

‘I have been focused to produce protein supplement as lab has been even producing non-veg ‘, he added There is no work on the production of protein though there are wheat, dal,  Bhatamas that’s why I am planning’. Wanted to do in byproducts.

He did not reckon what he did. He knows very well what he has.  He was persistent in his work and never engaged other unnecessarily. He got a lot of appreciation and support. He never noticed that he is providing employment to lot.

He did not reckon what he did. He knows very well what he has.  He was persistent in his work and never engaged other unnecessarily. He got a lot of appreciation and support. He never noticed that he is providing employment to lot.

800 people have got employment in NIMBUS. He is glad that it is creating employment in the situation when there is consistence growth of unemployment and contributing in the national economy.

NIMBUS was preparing to induce FDI sometime ago. It is internally preparing for IPO.  IPO of warehouse be soon to released though it will take some time in case of Bio-Tech quoting Managing Director Bagaria.

For this purpose, Nepal warehouse has gone into public company. Investors of this company have also been the investor of bank and insurance company.  There is plan for IPO of the both companies.

The NIMBUS aims for Rs. 40 billion transactions in 2030. He believed that he can achieve this easily. He has outlined the framework to achieve this in next 10 years. He is trying it since 1995. like feed, food business is doing good for him. So the NIMBUS has been already managing the half of the transaction of what has its aimed.

Capability of taking such challenge sprung NIMBUS into this level. We have been and will be moving to meet the growth, he said.

He did not start the business with full preparation. Guardianship of his father made him moving forward. There will be need of pace to win so he suggested new star-tup to plan well. New startup tends to vanished after sometime. so there is need of consistency to gain success he said.