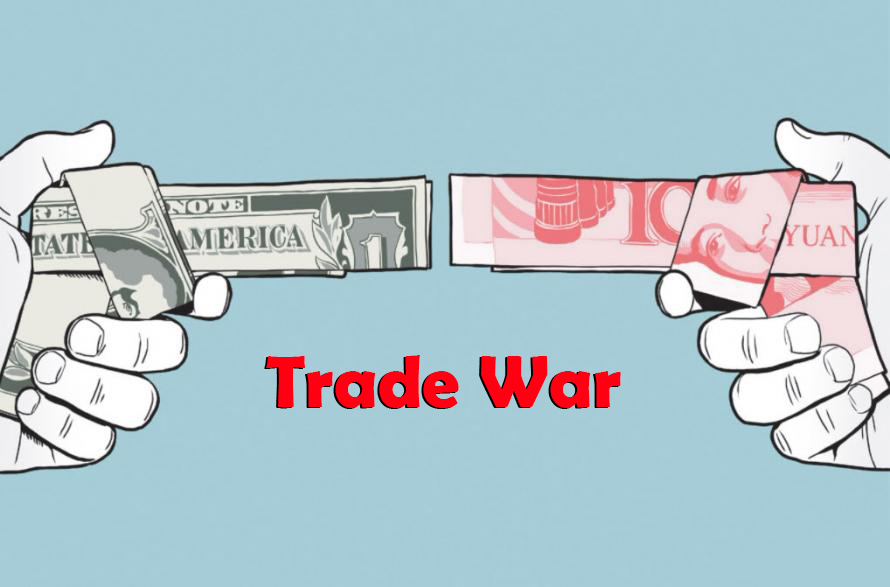 Aarthik News. The decision made by President Donald Trump based on the inputs given by his intellectual lieutenant Secretary of Commerce Wilbur Ross to apply twenty five per cent and ten percent tariff  on steel and aluminum imports respectively will have a cascading effect across the world. There were similar safeguard tariff on imported large residential washing machines and imported solar cells and modules in January, 2018, citing the reason that imports are a substantial cause of serious injury to domestic manufacturers.

The resolution bypassed the  international consensus by bringing forth the national security law coming under section 232, departing from the larger international conventional norms that trade barriers should not be applied and at least NATO countries should be exempted.

President Trump’s tweet about the US facing an unfair trade is a string of successive attempts to reinforce his ambitious program of providing employment to all Americans unveiled during the presidential campaign. According to him, some countries are dumping vast amounts of cheaper steel thereby forcing the domestic steel companies to shut down, leading to unemployment.

A drastic increase in US imports of steel from 22.5 million metric tons in 2016 to 26.9 million metric tons in 2017, making it the world largest steel importer has serious repercussions not only for the domestic steel producers but also for the US government. Imports have grown by 219 percent between Q2 2009 and Q3 2017, while at the same time exports have just increased by 32 percent. The gap between exports and imports have widened to such an extent that in 2017, the U.S. steel trade deficit (that is the gap between the imports and exports) amounted to 19.3 million metric tons. This is touted as the leading cause in the decline of the US steel industry.

Table-1, shows the Year-to-Date Deficits, which US has with its trade partners. This is one of the reasons why Mr. Trump embarked on a new protectionist policy. USA is having the worst trade deficit with China.

At least a clutch of Economists and financial experts see the developments damaging to the US economy but it is unlikely that it will escalate to a full global trade war or spiral out of control to a string of retaliatory trade wars. There are so many reasons for this proposition.

Firstly, the Chinese dragon is flaunting its imperial power and strength by dumping vast amount of cheap steel in the US. Instead of applying tariff, US should embark on a program to isolate China by pursuing a path which will involve all the countries, which are affected by distorted and subsidized trade policies of China.

According to the American Iron and Steel Report- 2017, currency manipulation is an example of a trade-distorting practice that harms U.S. steel producers and workers by keeping the prices of exported goods artificially low compared to similar goods from the United States, this is indirectly referred to China.

Working out with multilateral and bilateral trade policies and even regional trade practices can push the country forward in to sustainable trade agreements with countries like Canada, Japan and European Union. Reconciling lost path by engaging with WTO and re-establishing a meaningful involvement in TPP and NAFTA will lead USA to find a long term solution to the dumping problem and to have endurable trade relations with its allies. This will pressurize China to drop deleterious trade policies without any retaliatory trade practices by USA. The need of the hour is to facilitate a seamless web of international trade relations and open economy policies.

Secondly, applying tariffs on aluminum is a band-aid cure and provides only short-run benefits like increase in the number of domestic jobs in the same sector but in the long-run it will lead to lower personal income, lower levels of employment in other industries (particularly in the manufacturing sector) and is likely to decrease the output of the economy in the future. The higher negative costs in the long-run are likely to outweigh the short-run potential benefits and thus US will never benefit from this desperate measure. According to the recent study report by NERA Economic Consulting on, ‘Impacts of Potential Aluminum Tariffs on the U.S. Economy 2017”, they arrived at the above conclusions.

If you flip of the pages of US trade history, you can see some disasters and it can even become a case study for the current administration. Steel duties were levied by the George W. Bush administration; the duties resulted in a loss of over 200,000 jobs in the downstream industries that relied on steel, compared to the 10,000 jobs that were saved.

There are two other kinds of costs that the US will face if they continue with the practice of shielding their domestic industries from foreign competition by taxing imports. They are the cost of retaliation and the cost of imposing protectionism by other countries for their own selfish reasons.

Thirdly, a series of retaliatory measures by other countries will decrease the exports from US economy and those industries are likely to shrink thereby creating unemployment problems in other industries and service sectors. There’s always a desire to adopt protectionist policies that provide protection for one sector at the cost of other sectors. Initially it will entice the steel and aluminum workers and a general increase in output and employment but the momentum will cease to exist after some months or may be days. If you just have a cursory glance over history of trade wars, ‘De-escalation’ is the important buzz word.

Fourthly, according to the United States Census Bureau, from the table-2, the six major trade partners with US are China, Canada, Mexico, Japan, Germany and South Korea. They have a major trade partnership with the USA, to the tune of 58.5 per cent. If the US is hell-bent on administering tariff and other protectionist trade practices this trade will cease to exist.

Even though Mr. Trump, projects himself as the savior for protecting an industry that he sees as vulnerable to international trade. Raw steel production is at its highest when compared with the past quarter century and only employs nearly 1,140,000 people in the United States directly or indirectly.

This initial fire of protectionism will wane once President Trump gets illumined about the long-run consequences of his policies and then he will have to go back to the drawing board. Once that happens, all the countries can heave a sigh of relief and continue to dream for a better world with open and multilateral trade policies so that no citizens are deprived of cheaper and quality products.