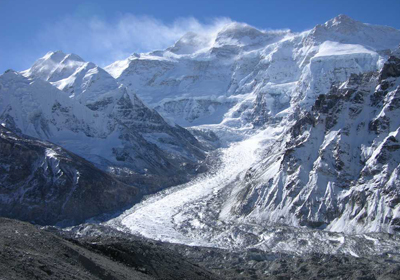 Kathmandu, May 16 . Two Indian nationals climbing the Kanchanjungha peak, the third highest peak of the world, have died while another one disappeared in course of climbing the mountain.
The Indian nationals who died are Kuntal Karar and Biplav Baidya, said Dinesh Acharya from Tourism Department, adding that they were climbing the mountain from Peak Promotion agency. As many as 36 persons including 10 Nepalis had reached atop the peak with the height of 8586 meters.
The mountaineering team member informed that Karar died of altitude sickness while reaching the altitude of 8,000 meters, while Baidya collapsed with exhaustion at the fourth camp after the ascent of the peak. Both of them died while being rescued by Sherpa mountain guides. Similarly, another foreign national went out of contact after reporting that he had scaled the peak on Wednesday night.
Search for the disappeared is continuous and the dead bodies are being brought down to the base, it is said. Those familiar with the mountaineering shared that change in weather creates problems in rescue operation.

Mehul arrested while he was having an affair with his girlfriend