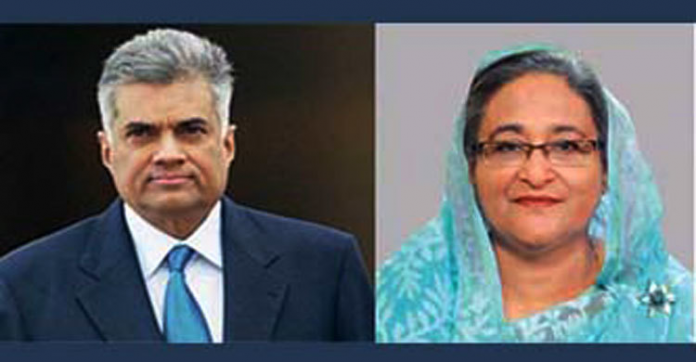 The Sri Lankan Prime Minister Ranil Wickremesinghe told the people of Sri Lanka on Monday, that he will fulfil the promises he had made to them when he assumed office last Thursday after the fall of the Mahinda Rajapaksa government.

In his first TV address after assuming office, Wickremesinghe listed the grave challenges ahead of him, but assured the people of his determination to meet them successfully. He also suggested the formation of a National Assembly comprising all parties, to arrive at solutions. There may be an example for him. He can Overcome the crisis by following Bangladesh’s ‘PM Sheikh Hasina Model’. Now the question is why and how. Let’s discuss.

The South Asian Island nation of Sri Lanka is currently going through an extreme economic crisis. Foreign exchange reserves have fallen so low that some school examinations have been closed indefinitely due to a lack of imported paper. In addition to cooking gas, there has been a shortage of kerosene and petrol.

The situation is so dire that due to inflation, high unemployment, and shortages of almost all necessities, many Sri Lankans are fleeing their country in the hope of a better life abroad. Countless Sri Lankans are now being forced to do something other than their main occupation as not everyone can afford to leave the country.The country has never been in such a bad situation since Independence in 1947. To cope with the situation, the Sri Lankan Government has asked for a new loan of US$ 1.5 billion from neighbouring India. When Sri Lanka faced problems, Bangladesh provided US$ 250 million for the first time. This was the first loan from Bangladesh for any country. They have again asked for a loan from Bangladesh. Besides, they have been repaying loans of different countries through the exchange of goods.

Sri Lanka was quite capable of human resources and internal prosperity. Then why their situation? Sri Lanka has undertaken several mega projects in their country for more than a century. These include seaports, airports, roads, and other projects that are currently considered unnecessary and redundant. Different governments of Sri Lanka have taken loans from different sources at home and abroad. As a result, their foreign exchange reserves gradually ran out. Instead of foreign investment, various governments have focused on borrowing.

The once-self-sufficient country is also in dire straits due to tax cuts, reduced income from tourism remittances, and unplanned decisions in agriculture. Different countries including Bangladesh have to learn from this situation. The world economic situation has begun to change rapidly since the Russia-Ukraine war, at which time any country could fall into a new crisis. We are hopeful that friendly Sri Lanka will soon be able to return to normalcy with the help of various countries and organisations around the world.

On the other hand, Bangladesh is currently a wonder of development. It is Hasina’s contribution that has made a least developed country such as Bangladesh a developing country now, going by economic indicators. Sheikh Hasina changed Bangladesh from a basket case to a middle-income country. Strong leadership is one of the main reasons behind ‘Bangladesh model.

The implementation of big projects is now just a matter of time. City facilities have also been ensured in the villages. A Metrorail will be launched in a few days. The long Padma bridge is not a dream now, it is real. The implementation of such a project with the government’s own funding was at one time unimaginable. The country is moving forward with a sound plan.

The High Commissioner pointed out that Bangladesh’s growth stems largely from its success as an exporter of readymade garments, which account for 83% of its total exports, and remittances from overseas, which amount to over 7% of GDP. However, the principal driver of growth is investments, which has risen from 24% of GDP in 2000 to 32% in 2019. When asked about Bangladesh’s amazing rise and economic growth, she put it down to the “Sheikh Hasina factor”.

The High Commissioner emphasised that during the Covid-19 pandemic, the government offered a 2% incentives bonus for Bangladeshis sending remittance back to the country, creating $2 billion to keep the growth going. In addition, the Bangladesh Government under Prime Minister Sheikh Hasina provided an exponential stimulus to the economy to protect the marginal fringes of the workforce. She also highlighted that completion of the Padma Bridge will make a huge contribution to the economy.

Nobody disputes the economic credentials of Sheikh Hasina’s government – the Asian Development Bank (ADB) is the latest member of a growing list of international institutions attesting to Bangladesh’s economic success. The ADB ranked Bangladesh as the fastest-growing economy in the Asia-Pacific region, eclipsing China, Vietnam and India. At the same time, our improvements in many socio-economic indicators are another object of envy to our neighbours.

When she returned to power in 2009, Sheikh Hasina knew that the energy shortage first needed to be mitigated to a tolerable extent, before embarking on long-term plans. As a temporary measure, she decided to allow private companies to build small-range power plants, known as quick-rental power plants. The decision received a barrage of criticism from many quarters — from opposition parties and economists to the press and think tanks — intimidating many in the bureaucracy.

But Sheikh Hasina refused to back down from what she thought was the right step forward. She defended her decision forcefully, making necessary amendments to clear any legal ambiguity, and focused on its implementation. Nearly 10 years on, no one doubts that the decision was instrumental in solving the persistent energy crisis.

While in power, Sheikh Hasina has opened up many sectors traditionally reserved for the public sector to the private sector, including health, banking, higher education, TV and even export processing and economic zones. At the same time, her government has substantially widened and expanded welfare programmes to lift the poorest and most neglected section of the population and increased subsidies for other crucial elements of the economy such as agriculture. Her development philosophy is a blend of capitalistic and socialistic virtues.

Propelled by a robust manufacturing sector and an enormous boom in infrastructure, Bangladesh has set a target of becoming a developed nation by 2041 to coincide with the platinum jubilee of its independence. Many commentators have called the goal ambitious, but even the government’s staunchest critics would think twice before questioning its plausibility.

The present government in Bangladesh has shown great prudence and foresight in the progress of Bangladesh. Bangladesh current regime has ensured political stability in the country, zero-tolerance policy against terrorism, illegal narcotics deal, empowerment of women, liberalism of economy, social welfare policy towards the people, increasing capacity building through training, inclusive economic growth policy, timely bold decisions etc. For this reason, there is nothing to be afraid of seeing the situation of any country as a nightmare. Around 100 economic zones are being formed. Investment is coming from different countries. Foreign exchange reserves are adequate (US$ 45 billion, January 2022), and remittances are satisfactory. It can be said that every economic foundation of Bangladesh is still in a strong position. The economy of Bangladesh was also active during COVID and emphasis has been laid on revenue collection and the agricultural sector of Bangladesh is very strong. Bangladesh is in a positive position in terms of foreign exchange reserves, remittances, and export earnings.

Bangladesh’s foreign exchange reserves now stand at more than US$ 45 billion, despite rising import costs. With which we will be able to meet the import cost of six months. Bangladesh’s growth rate was way above Pakistan, even before the pandemic; in 2018-19 it was 7.8% compared to Pakistan’s 5.8%. Various international organisations, including the World Bank, the World Economic Forum, and the Economic Intelligence Unit, have identified Bangladesh’s economic development as a “wonderful puzzle”. While the current economy of Bangladesh is US$ 410 billion, the size of Pakistan’s economy is about US$ 260 billion.

Bangladesh has improved its quality of life, economic strength, prosperity, education, and research in every field. Due to the global coronavirus pandemic, Bangladesh’s growth has slowed down. But where the growth of all the developed countries of the world was negative in these years, the achievement of Bangladesh was also noticeable.

Premier Sheikh Hasina has achieved full potential to move from a least developed country to a developing country. It has been possible because of people’s hard-working, strong leadership. Political stability, the flow of FDI, empowerment of women, unique poverty alleviation model, inclusivity of economy, etc. That is the story of a South Asian country: ‘Bangladesh’ is a ‘miracle story’.