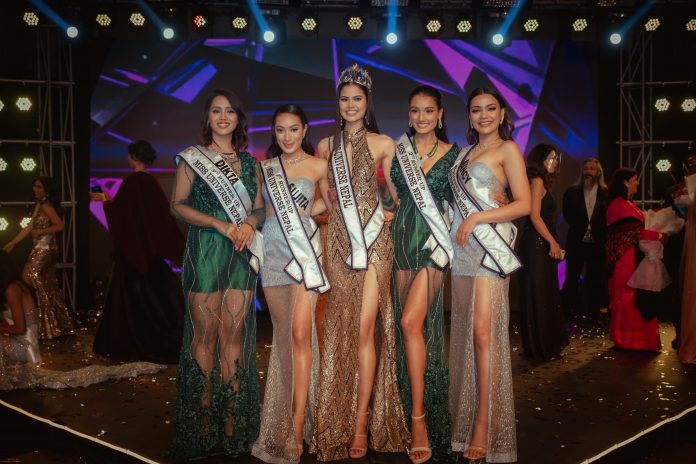 Kathmandu, Dec 31. Anshika Sharma ,a 24-year-old, from Sydney, Australia bags the title of Honda Nepal presents Miss Universe Nepal 2020. Alongside winning the cash prize of 10 Lakhs and a crown worth 15 Lakhs from Apala Jewels, Sharma will also represent Nepal in the Miss Universe stage in either April or May of 2021.

The Top 18 contestants awed everyone in their swimsuits and gave an introduction to further into the Top 10. Nina Kant Mandal winning the Brave, Bold, and Beautiful Social Advocacy title secured immunity into the Top 10. Following the swimsuit rounds in the finale, the judges placed five contestants on the Top 10, and the remaining four were chosen by audience vote.

The Top 10 faced a question-answer round while the live voting for the Top 5 was going on. Similar to the previous round, the judges chose 3 contestants for the top 5 and the remaining two were chosen with the highest live votes.

In beautiful evening gowns, the Top 5 ladies answered another set of questions which decided the winner and runner-ups for the pageants, 100 percent on judges scores only.

Based on their answers, the winner was chosen, and for Anshika she gave an answer which just won the judges’ hearts. The question was about a life lesson learned during COVID to which she answered that either individuals or governments, all should be ready for challenges and be economically prepared.

The extravagant Miss Universe Nepal 2020 Finals took place in the Kathmandu Marriot Hotel after weeks of virtual training and competition. Hosted by Subeksha Khadka and Rabi Rajkarnikar, the event went live on AP1 HD and the MUN YouTube page.

MUN stands as an epitome of redefined and inclusivity in the world of pageantry as there were no restrictions on height, weight, sexuality to participate in the pageant as any Nepali woman within the age range of 18-28 could participate. Due to the inclusivity factor, MUN saw their first transgender contestant, Angel Lama who made it to the Top 18 of the pageant.

Birat Petro seeks permission to sell petrol for Rs. 155 per...