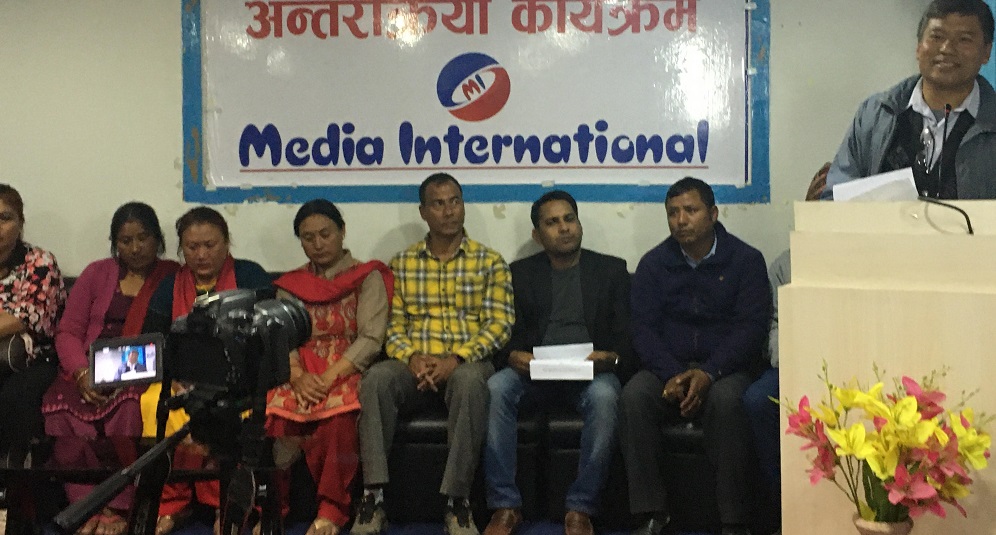 Kathmandu, Nov 13. The plaintiffs of the pending litigation at the Kathmandu District Court in has threatened by the opposite lawyer and asked to settle the case out of court. The seven plaintiffs has revealed the incident at a press meet yesterday.

According to the document distributed at the press meet, the opposite lawyers Mr Devendra Pradhan, Managing Partner of PRADHAN & ASSOCIATES has forwarded a letter with threaten.  The plaintiffs have demanded the legal action against Pradhan who has violated the universal norms and value of a lawyer.

The hearing date was scheduled on November 6, 2019. But, Pradhan has sent a letter to the lawyer of plaintiffs Mr Amrit Kharel with threatening language and the claim that his clients are going to defeat the case. He also had claimed that their rite would be dismissed.  Pradhan has wrote, “As you may see that in the event the court proceedings in these litigations are to proceed and these lawsuits (except for Sherya Jha) are dismissed for the lack of jurisdiction, Plaintiffs most likely will be without a remedy.”

The following is the part of the threaten letter which Pradhan has sent to Kharel to compel  the plaintiffs to withdraw the case and be agree with the offer sent by US-Bangle through Mr Pradhan.

The letter said, ‘We are of the belief that claims raised by the plaintiffs in these lawsuits, except for under the Warsaw Convention as amended at The Hague 1955, are without legal basis and ultimately are subject to dismissal for the reasons, among others, stated below:’

3. The only applicable international convention to this litigation is – Warsaw Convention as amended at The Hague 1955. Except for the lawsuit related to Sherya Jha, all the deceased passengers purchased round trip ticket to Dhaka-Kathmandu-Dhaka. Under Article 28 of the Warsaw Convention as amended at The Hague 1955, Kathmandu is not the place of destination”. As such, Courts in Nepal do not have jurisdiction in this matter. We will present more than a dozen of case laws from different jurisdiction interpreting Article 28 in support of our defence.

4. The Report prepared by the Accident Investigation Commission is not admissible in evidence based on various Nepali statutes. Further, Plaintiffs claimed on a portion of the Report without consideration to Appendix 5.17 which stated otherwise.

As you may see that in the event the court proceedings in these litigations are to proceed and these lawsuits (except for Sherya Jha) are dismissed for the lack of jurisdiction, Plaintiffs most likely will be without a remedy. Further, in the event, Plaintiffs are required to deposit the entire court fee of over NPR 3 million and their lawsuits are dismissed, it would be painful situation for them.

It is our belief that Plaintiffs can still avoid the unfavourable situation. US-Bangla wishes to extend Plaintiffs a full and final settlement out of the court on the terms offered to them previously in order to avoid lengthy litigation which definitely will take several years. Nonetheless, in the event an amicable settlement is not achieved, US-Bangla is prepared to proceed with these litigation aggressively.

Please judge your action accordingly. We are more than happy to discuss this matter further.

This letter had sent him five days before of the scheduled hearing. So, the plaintiffs postponed the hearing to avoid the unlawful judgement and possible corruption.