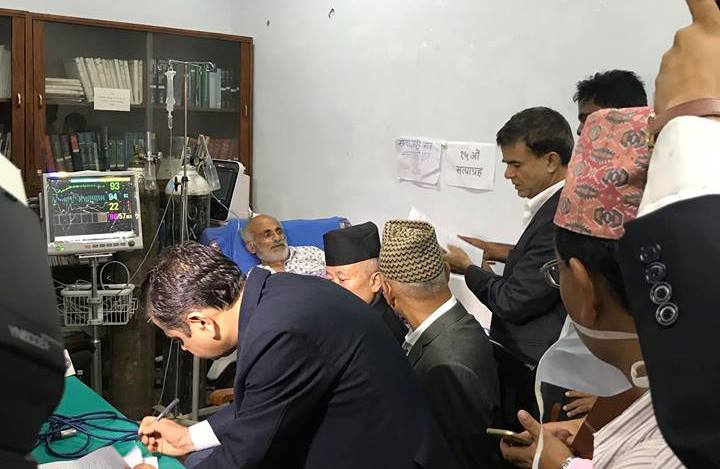 Kathmandu, July 30 . After the government made agreement with agitating Dr Govinda KC for the reform on medical education, how the implementation of the agreement is going on is a matter of significance.

While breaking the fast-unto-death of Dr KC, Deputy Speaker of Communist Party of Nepal, Subash Nembang had said, “I believe the agreement between the government and Prof Dr Govinda KC will be implemented through the sovereign parliament. The people’s representatives will endorse the agreement.”

Now, the parliament has begun implementing the agreement. For it, Minister for Education, Science and Technology, Giriraj Mani Pokhrel, had presented the national medical education bill 2075 in the House of Representatives on Sunday. Lawmakers will put forth their views on it.

As per the 9-point agreement, the existing medical education bill should be revised on various 22 points.

The agreement has a provision to have medical education commission to be formed under the chairmanship of the Prime Minister.

As per the agreement, each province will have a medical college. The government medical college will provide the master’s level of education free of cost. One university will be allowed to provide affiliation only up to five medical colleges.

The medical institutions that have already received the letters of intent can handover their properties by taking due compensation if they so wish as well as they are entitled to additional facilities provided that they wish to shift in the prioritized areas.

The ordinance on the national medical education was brought last October. As mentioned in the ordinance, common entrance examination, determination of standards, letter of intent, number of seats, affiliation and other crucial aspects were supposed to be determined through the commission.

As per the content of the bill, the medical education commission is proposed to be 17-member by slashing from 34-member of the ordinance.

Process of taking action within two months
Meanwhile, the agreement paper signed between the representatives of the government and Dr Govinda KC states that process of actions on officials convicted by the judicial probe commission on medical education would be initiated within two months based on the recommendation of the commission.

The probe commission formed under the then chairman of the Special Court Gauri Bahadur Karki had recommended the names of 73 persons for action.

Likewise, the agreement states to immediately constitute a taskforce to begin the classes of MBBS and other bachelor’s level classes in the Academy of Karnali Health Sciences.

11 months on, Galchhi-Kerung International Highway not in operation