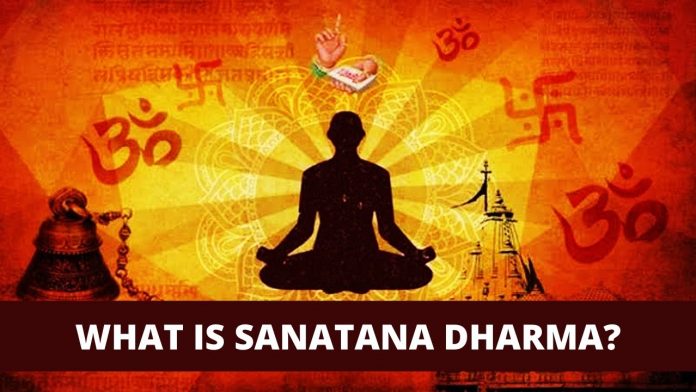 There is the persistent propaganda that somehow Buddha Dharma and Hinduism are two separate religions. That is not correct. To be clear Dharma is not Religion. Hinduism is the collection of many Dharmas evolved in our region, including Buddha Dharma.

Buddhists are not a nationality, but a discipline. Nobody is a Buddhist at birth. To be a Buddhist, a person needs to know what Buddha Dharma is, practice and transform within. It is like claiming to be a ‘Body builder.’ You should practice and experience the transformation to claim to be so.

We are proud of Buddha Dharma and that Buddha was born in Nepal. However, we have many other Dharmas besides Buddha Dharma, e.g. Shaiva, Vaishnav, Tantra, Kirati, Sikh etc. Further, we also have variations of Shiva Dharma, e.g. the Tibetan Bon Po and the Kirati Mundhum. Buddha Dharma is parallel to all of these Dharmas and does not incorporate them. Thus, calling Buddha Rastra excludes others.

Besides, Dharma is not religion. Unlike religions, our Dharmas are not exclusive, not separate and not in the adversarial opposition to others. Ours is not stand alone Dharmic practices. On the contrary, our Dharmas overlap and complementary to each other. Thus, we all practice all the Dharmas with different emphasizes, and with regional and Jatiya variations. That is, our traditions are blends of many Dharmas with different groups emphasizing different aspects. We all ‘Tuladhar, Gurung, Shrestha, Rai, Tamang, Yadav, Sharma, Bishwa Karma, et al’ celebrate Dasain, Tihar, Buddha Jayanti, Shiva Ratri, etc. Thus, the question is what ‘term’ incorporates all these variations?

The correct term is ‘Hindu Rastra’, which incorporates all of them. That is why all Dharmas within Hinduism uses ‘OM’ as the root, e.g. ‘Om, Mani Padme Hum.’

Because Dharma is not Religion, using palimpsest of religion on Dharma is not correct. Religions (Christianity, Islam, Communism, Fascism, etc.) are brain washing systems for social control. Each claims exclusive truth, all others evil, and the central theme is ‘Violence.’ Each comes with a set of doctrines to believe and a set of commandments to obey without question. They divide humanity into ‘believers’ and ‘non-believers’, and put them in the adversarial positions.

On the other hand, Dharmas (Bauddha, Shaiva, Vaishnav, Tantra, Jain, Sikh, etc.) are about ‘Satya – truth’ and ‘Yoga – discipline of inner progress.’ Dharmas overlap, learn from each other, and the central theme is ‘Peace’, within and without. Hinduism is the collection of all the Dharmas evolved in our region. It is a geographical definition, not doctrinal. A person is a Hindu if the person practices any, all, none, or some of the Dharmas evolved in our region. Our spiritual disciplines are not imposed on us, but our own choosing. Our practices have overlaps and diversities; and are not in the adversarial position. Thus, we must avoid the religious palimpsest to define Dharmas.

Buddha Dharma is a part of Hinduism. Buddha Dharma is an offshoot of Shankhya Dharma, which itself is the offshoot of Shaiva Dharma. Siddhartha Gautam was an ordained monk in the Nirwanee Sampradaya of the Shankhya school, before being enlightened (Re: Paramahamsa Nithyananda). Siddhartha Gautam learned from then existing various Dharmic schools and practiced ‘meditation – Raj yoga’ and ‘intellectual inquiry – Gnan yoga’ among others as existed for thousands of years. The popular Buddhist Vipassana meditation is one of the techniques out of 112 taught by divine Shiva. The major difference between Buddha Dharma with Shaiva and Shankhya is that Buddha Dharma is strictly empirical and does not use any belief system. Since Buddha Dharma is empirical and minimizes ‘beliefs’, in human understanding of the universe, it comes after the ‘Science.’

The relation between Adwaita\Shaiva Darshan and Bauddha Darshan is given by the ritual initiated by none other than Adi Shankaracharya. Divine Shree Pashupati Nath (Lord of Life, not lord of animal. Though animals are also life.) is worshipped as the Buddhist Avalokiteshwor once a year.

Buddha means ‘enlightened’, not divinity. Theravad Buddha Dharma considers Buddha as the path blazing light. But individuals must work themselves. Thus the lesson ‘Appo Deepo Bhava – be light within.’ It emphasizes, like Shaiva Dharma, Gnan yoga and Raj yoga.

However, after the advent of Mahayan, Siddhartha Gautam is also recognized as ‘Avalokiteshwor \ Karunamaya – Compassionate one.’ That is to recognize his divineness and now we can take refuge in him ‘Buddham Sharanam Gachhyami.’ Thus, he is also recognized as the ‘Vishnu Avatar.’ Mahayan practice worshipping \ Puja and other Bhakti yoga methods. It emphasizes, like Vaishnav Dharma, Bhakti yoga and Karma yoga. All the Buddhist monasteries, especially Mahayan, have the Hindu deities, e.g. Ganesh, Sharaswati, Indra, et al. Some time, these deities are given slightly different personalities. In a few cases, even Rawana of Ramayana is given as repentant and improved personality. That is the Buddhist practice of seeing good within in all.

The harmonious coming together of the main three Dharmas within Hinduism in Nepal – “Bauddha – Buddha, Shaiva – Nilakantha, and Vaishnav – Narayan” is given in the temple, which we loving call ‘Budha Nilakantha Narayan.’

One of our divinity ‘Manjushri’ in Sanskrit means ‘Gentle glory.’ He is also known as ‘Manjughosa’ and by the full name ‘Manjusrikumarabhut – young prince Manjushri.’ The legend that Kathmandu valley was a lake before and the cut at Chovar gorge let water out to open the valley is quite popular. One version tells the divine work done by Manjushri and another tells divine Krishna did. It simply means our legends are the blends of many cultures.

We have to understand that evil religionists of ‘Christianity \ Islam \ Marxism’ like to attack all around, including Hinduism. One of the technique they use is ‘divide and rule’, i.e. issue propaganda that ‘Buddha Dharma is different from Hinduism, and they are adversaries.’ We have to reject such propaganda forcefully.

The Muslims instigated by the evil Islam committed wholesale murder of Buddhists and Buddhist monks. They destroyed Nalanda and Taxashila Universities and burned their libraries. Then, they were the biggest institutes of learning in the world. Afghanistan used to be a Buddhist nation. Today, Buddhists are wiped down to nothing. They even destroyed the Bamiyan Buddha.

May Buddha bless us all!

3. Debunking False Narrative of Buddhism being Separate from Hindu Philosophy

6. Is Buddha or Buddhism against Sanatana Dharma

10. Buddhism vs. Hinduism! What’s the difference?

1. Buddha Dharma is a spiritual discipline for enlightenment and inner peace. If everybody follows Buddha’s teachings of ‘Daya, Karuna’, world will be so much the better. But it is not good enough. What about aggressions of evil ideologies like Christianity, Islam, Fascism, Communism? For example, Afghanistan used to be Buddhist nation. Evil Islam attacked, destroyed world’s biggest library ‘Taxila University’, killed monks, and today it is totally Muslim nation. Muslims even destroyed the Bamiyan Buddha. There must be political\social dimensions for defense. Rose must grow thorn to live.

2. Gurung\Tamu is Jati, Buddha Dharma is spiritual discipline. They are different issues. The original Dharma of Gurung people is ‘Shiva’ Dharma. The ‘Bon Po’ is Tibetan version of Shiva Dharma. Buddha Dharma, Vaishnav Dharma etc. were added later. ‘Lama’ comes from Mahayan Buddhism, not Therabad Buddhism, and ‘Jhakri’ comes from Shiva Dharma. Thus, you should be clear what your organization wants to represent, and what to exclude. If you put all components together, then the correct term is ‘Hindu.’ By the way, no body is a Buddhist at birth, as you claim. To be a Buddhist, a person needs to know what Buddha Dharma is, practice and change within. It is like claiming to be a ‘Sitarist.’ To be a ‘Sitarist’ the person needs to know what Sitar is, and learn to play.

3. Dharma is not religion. Dharmas (Bauddha, Shaiva, Vaishav, Jain etc.) are about ‘Satya – truth’ and ‘Yoga – inner discipline.’ Hinduism is the collection of all the Dharmas evolved in our region. Dharmas overlap, learn from each other, and ‘peace’ is the central theme. Dharmas are defined by the marga\process\way\disciple. Hinduism is geographical definition.

Religion (Christianity, Islam, Communism, Fascism etc.) are brain washing systems for social control. Each claims exclusive truth, all others evil, and ‘violence’ is the central theme.

From Shiva (Adwaita) Dharma comes ‘Shankhya.’ And from Shankhya comes Buddha Dharma. Buddha was an ordained monk in the ‘Nirwanee lineage’ of Shankhya School before enlightenment. Buddha means ‘enlightened’, not divinity. Thus the lesson ‘Appo Deepo Bhava – be light within.’ However, later Mahayan school recognized Buddha as ‘Avalokiteshwor \ Karunamaya’ willing to take care of ordinary people like us, not merely guide us, then he was seen as the divinity – ‘Avatar.’

Thus, each Dharma within Hinduism uses ‘OM’ as the root, e.g. ‘Om, Mani Padme Hum.’ The coming together of the main three Dharmas within Hinduism – ‘Buddha’, ‘Nilakantha – Shiva’ and ‘Narayan’ is given in the temple in Kathmandu, we lovingly call ‘Budha Nilkantha Narayan.’ (TilakBS@hotmail.com)

Lumbini Bank proposed for 15% bonus share, paid up capital to...

President Bhandari in Beijing; cooperation between Nepal and Shaanxi Province